Otranto: Quick guide on the Cathedral

Otranto is a magical and unique place. Visiting this city, pearl of Salento, can create addiction. A sweet addiction. The white houses are overlooking the sea and the old town, enclosed within the walls, looks like a maze of streets in the eyes of the visitor. You cannot say that you have visited Salento without having walked, with your nose upside down, for at least an hour, through the streets of this small town. Otranto is incredibly beautiful. Simply magnificent. Its splendor is the result of a balance that has remained unchanged over time, the perfect mix between welcome and hospitality of people and respect for the landscape/naturalness of places.

The inhabitants of Otranto are special people. Hospital and welcoming. Otrantini (the inhabitants of Otranto are called in this way) are always ready to give the right information and suggestions to visitors. This usually happens all over Salento but, in Otranto, you will never find an unsatisfied tourist. The locals are always ready to give suggestions on restaurants, hotels and places to visit. The Cathedral of St. Martyrs, the bauxite quarries, the Tower of the Serpe (symbol of the city of Otranto), the monastery of St. Nicholas of Casole, the lighthouse of tip Palacìa and the golden beaches of the Alimini are the destination places of the Otrantine tourist flow.

Otranto: respect for the naturalness of places

The land of Otranto attracts more and more national and international tourism because, over the years, the institutions have protected the environment and tourist centres, fighting the abuse and imposing restrictive laws and landscape constraints. In doing so, the beauty of the places has remained unaltered and nature has been protected from environmental damage. This way of operating on the territory has allowed the revival of tourism in Salento and Otranto has played a fundamental role in this. The points of historical and landscape interest have been preserved and enhanced by a new way of tourism and hospitality.

The cathedral of Santa Maria Annunziata: how to reach Otranto and visit the cathedral

The Cathedral of Santa Maria Annunziata is a unique spectacle.
Much effort has been made to protect this historic asset and the historical-artistic heritage in it: the mosaic, for example, has been preserved through targeted restoration works over time.
To reach Otranto and visit the cathedral, you have several possibilities:

By plane to Brindisi Papola Casale airport, by train to Otranto with train change in Lecce

Papola Casale is the airport closest to the heart of Salento (for more information click here).
Once you have landed you can rent a car from the different car rental companies and head to Otranto, passing from Lecce.
Or you can easily opt for public transport by taking a convenient Brindisi-Lecce train, changing trains and heading to Otranto station with the South-East Railroads (for more information click here);

After almost all of the A16 motorway, you have to take the exit Bari Nord and continue on Brindisi-Lecce (we talked about Lecce in this post about Baroque).
As soon as you arrive at the gates of the Salento capital, take the East ring road and follow for Maglie – Otranto – Santa Maria di Leuca.
As soon as you arrive in Maglie, you can easily take the state road SS 16, direction Otranto with ease. Recently they have widened the carriageways of this state road and have installed a traffic partition so that the road is really comfortable and safe;

You can easily reach Otranto by taking a bus from Lecce. Check the site SALENTO IN BUS and check times, availability and tickets.

How to reach the Cathedral once arrived in Otranto

Reaching the cathedral is really very simple. Once inside the walls, from the entrance adjacent to the Heroes’ Monument (“Il monumento degli eroi”), you just have to follow the main road on foot and turn right at the first crossroads. Take a small climb and after about 100 meters you will find the SS. Maria Annunziata on the left. The show that will look to you in front of your eyes will be sensational.

The Cathedral of Otranto: centuries of history, spectacularly preserved

The cathedral is the symbol of Otrantine resistance to the Ottoman massacre. It was July 28th, 1480 when 800 Martyrs were beheaded on the Minerva Hill because they resisted Islam, following the example of their leader Antonio Pezzulla (the Primaldo). The relics can be found, well preserved in three cases, inside the basilica, in the right aisle. 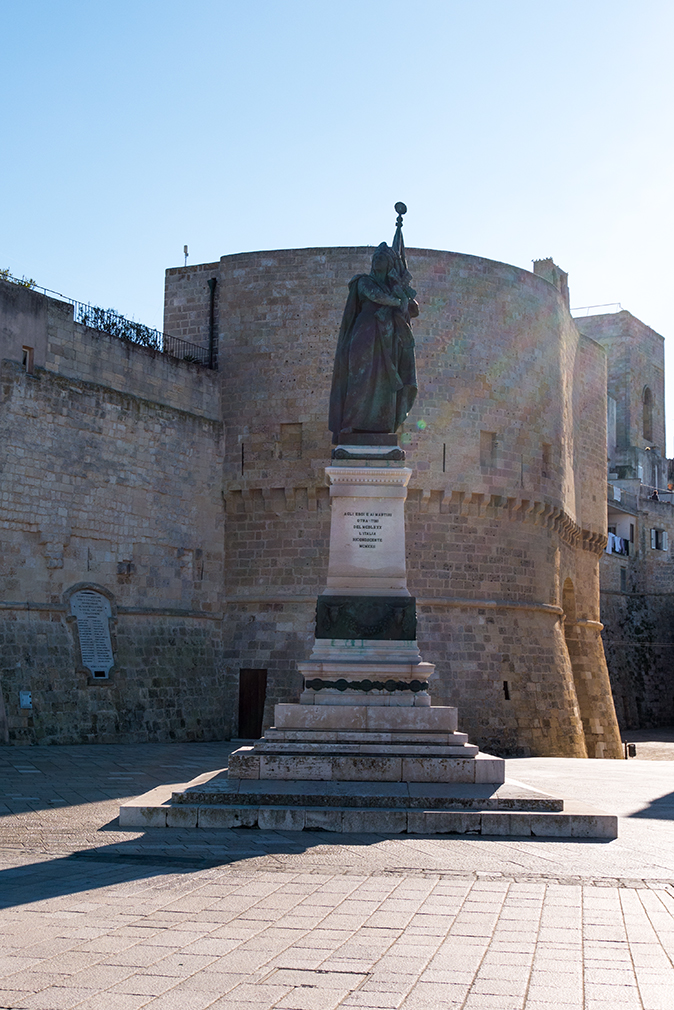 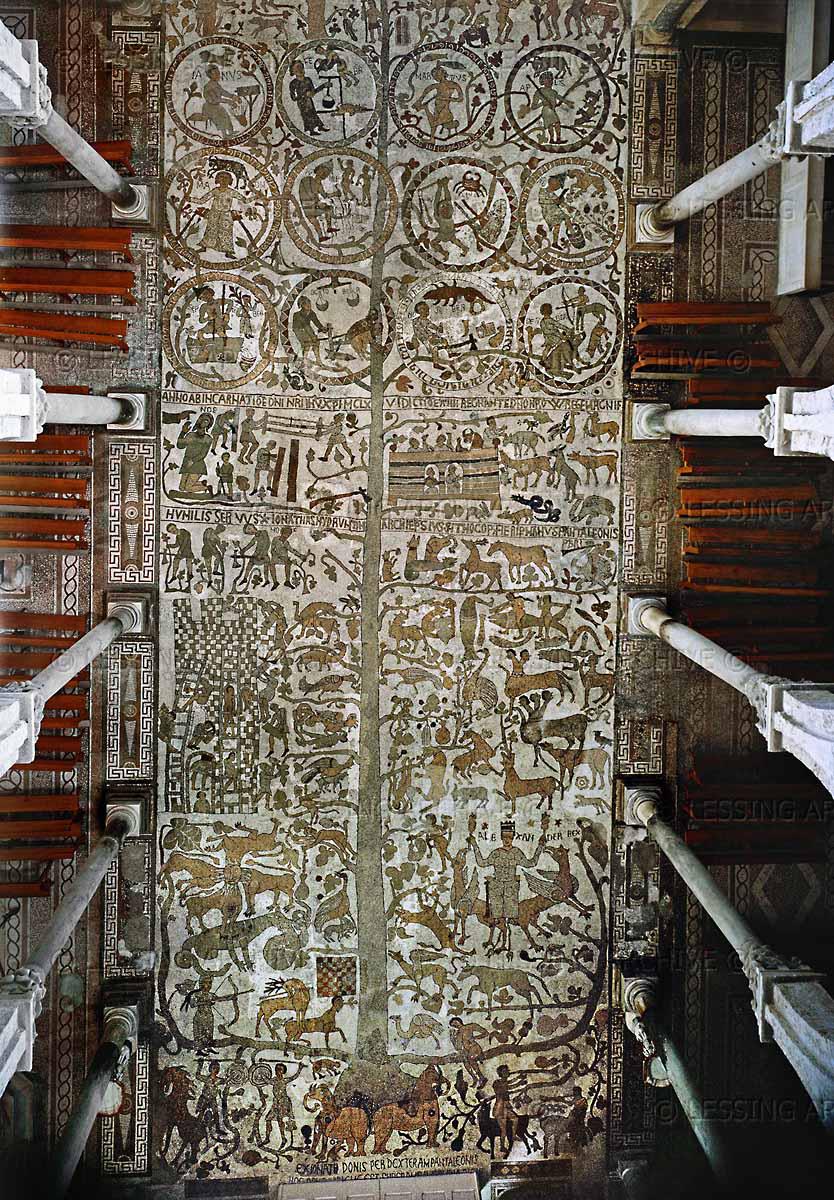 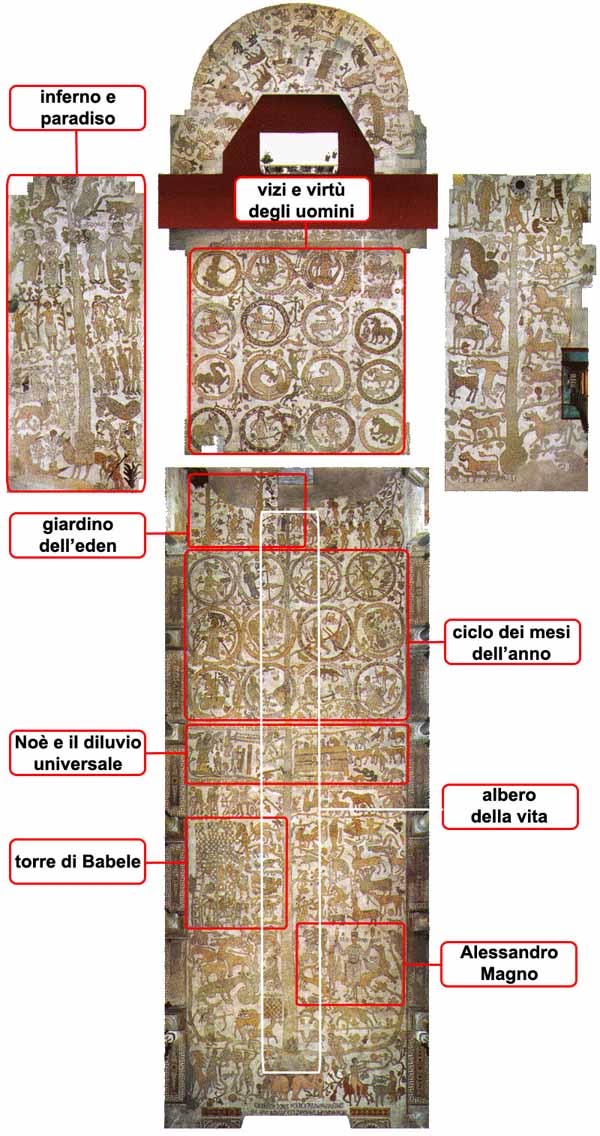 The mosaic of Otranto, in this image, is presented in its totality.

The interior of the church is a Latin cross and the spaces are well divided by fourteen marble columns. The central ceiling is in Moorish style with wooden coffers, as well as the side ones. On the side walls you can see several frescos, or rather what remains of beautiful frescoes, destroyed by the Ottoman fury. After the taking of Otranto in 1480, the Turks used this place of Christian worship in the mosque and destroyed all the sacred images, preserving only those of the Madonna that they still venerate.

As soon as you enter the church, on the left there is the baptismal font (dating back to the seventeenth century), while on the right, before the staircase leading to the crypt, there are 4 monolithic columns decorated in Lecce stone by Ricciardi (1524). The tabernacle is located in the left aisle, while in the right aisle you can admire the remains of the SS. Martiri and, under their remains, under the altar of the right aisle, you can admire the stone of decapitation. A wooden statue of the Virgin Mary dominates the altar.

The floor mosaic of the cathedral: the tree of life recounted in 600 square meters

Dating from 1163 to 1170, the floor mosaic covers 600 square metres. Commissioned by Archbishop Gionata, it was realized by the Pantaleone. The presbyter, through this artistic work, wanted to depict the Bible, patrology and history of man, starting from the expulsion from the Eden of Adam and Eve to the Last Judgement.

The themes covered by Otranto’s floor mosaic: a tree of life with endless branches

In the three naves, the theme of the tree of life is used by the Pantaleone to tell the story of humanity.
The tree is a symbol of the Logos, of God’s word, and from it all the cultures that have influenced European culture are unravelled.
The tree divides space into two equal parts and has “solid and well planted” roots on two Indian elephants.
Each branch of the tree has a story to tell and experiences to highlight. It speaks of pre-Christianity, Christianity, mythology, bible, history, literature and mythology, demonology and angeology.

Reading mode: from top to bottom

The possibilities of reading the mosaic are different from the bottom upwards or from the top downwards.
We suggest the simplest way: from top to bottom, that is, from the tree crown to the roots.

We start with the Hunting of Adam and Eve from Paradise in two moments:

In the following you can notice

The right nave: tree of redemption, the “Logos” that redeems

The theme of the right nave is the Tree of the Redemption, dominated by biblical and mythological giants.
Then we have Samuel with the roll of the Law, different animals such as goats, a dragon, a lion and mythological animals that represent sin and vice.
This nave explains, through these metaphors, that Humanity is in constant struggle for the Redemption against vice and sin, metaphorically represented by mythological creatures and animals such as: the Sphinx, the Minotaur, the Wild boar and the wolf.
Against them the Canes Domini throw themselves with Cornflower in their mouths and the androcephalus lion.

The left nave: universal judgment through the representation of paradise and hell

In the left aisle there is a true and proper representation of the Last Judgement through the use of figurations of Heaven and Hell.
The Hell, here portrayed, recalls the Dante’s iconography of the Underworld: the door of the damned, Satan, naked damned souls, the Furies, the devil executioner, Caron, Cerberus, the harpies and the Minotaur.

We have tried to tell you what we saw with our eyes, even if it is really impossible to describe the mosaic in detail. A new website should be created to tell you about the cathedral and its history.
If you have already had the magnificent experience of visiting this exceptional monument and you want to tell us about it, you can use the comments or write us an email to info@foodismo.it
We will be happy to read your impressions and respond to your comments! 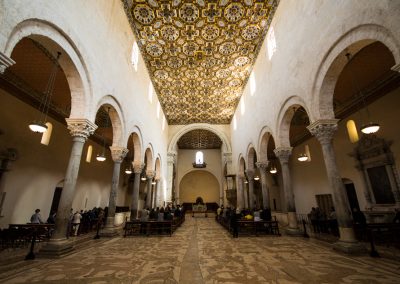 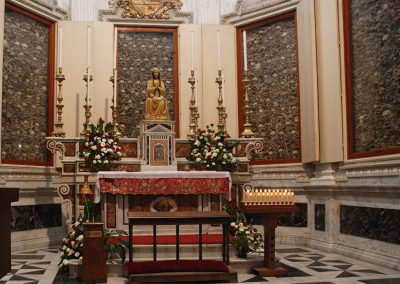 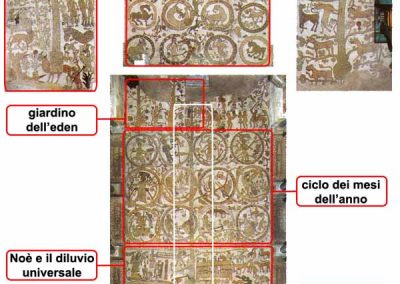 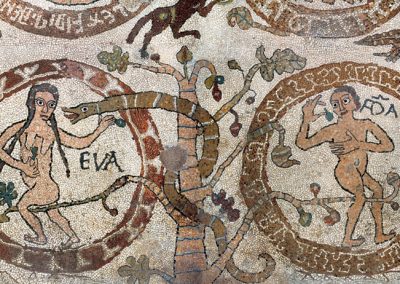 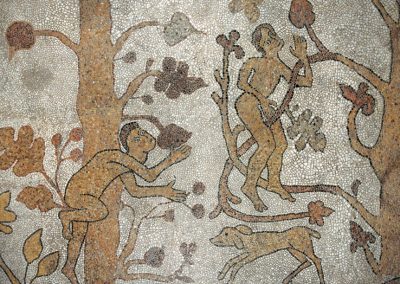 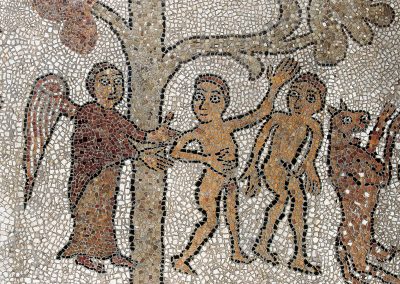 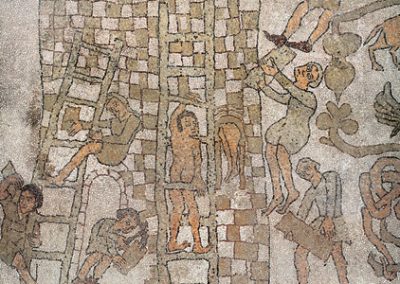 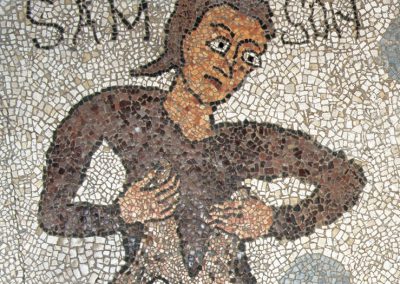 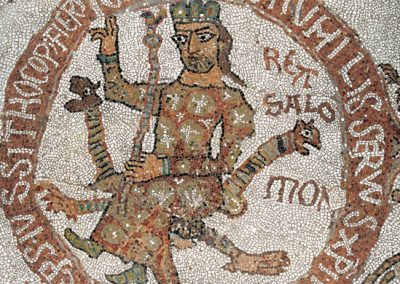 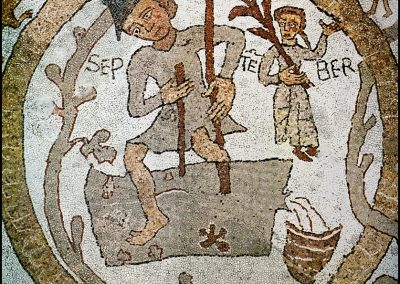 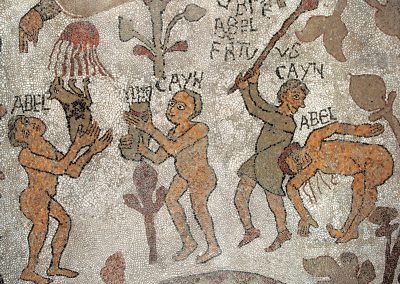 Live Salento as it is your land: with locals, like locals!